"Ease up, Tiger" he said with his forearm planted firmly against the assailant's throat while he calmly looked into the eyes of the attacker.

I was in a small North Richmond lounge-room with 12 other men (mostly younger than me) on "Origin night".

I've always enjoyed a good game of State of Origin football between the Blues and the Maroons, but up until now I've never had the privilege of watching it with the religious. In the afternoon leading up to the 80 minutes of testostoronic television gazing, I was gently coerced into revealing where my loyalties lay... and, seeing that I'd lived in Queensland for two and a half years, the answer was inevitable. 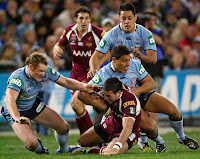 The admission of my Maroon tendencies proved to be a lonely one with two other "Queens-lan-ders" in a room filled with Blues supporters. They were all polite and civil as we had our fill of Dominos Pizza, but even then I sensed a deeper tension beneath the surface ... a tension that spoke of loyalty, courage, passion ... and, well, blood-curdling rivalry.

The first half of Maroon domination brought on by the Blues' inability to hang onto the ball gave our minority group plenty to smile about. But smiling wasn't enough for my compatriot sitting a little to my left ... he seemed to think that gloating, taunting and parading were more appropriate responses. He turned to me at one stage and said, "You're not saying much Trav!" To which I replied, "I'm not sure I need to." ... thinking that his antics were possibly antagonizing the New South Welshman enough already.

This thought proved to be true when the Blues scored their first try, and my friend somehow managed to find his way off of his seat, and pole-driven into the carpet ... then with another, a football was sent flying across the room connecting squarely in the side of my Queensland-loving friend's face. ... The room became silent for a moment as an awkward apology was made, and ignored with the words, "Just you wait" ... and the time-bomb had been set.

The second half saw the Blues fight back and it looked as though the vocal Queensland supporter might end up red-faced in more ways than one ... but he sat in silence, awaiting his moment for revenge. Then, just minutes before full time, Queensland celebrated a try, but confirmation was needed from the video ref ... and when it finally came, revenge was swiftly pursued. Before long, shirts were ripped, bodies piled up on one another and best mates would have been exchanging punches if not for the size of the room ... and the youth pastor.

Ryan wrestled the Queenslander off of the ball-thrower and, with his entire weight on top of him and his arm pressed up against his throat he looked into his eyes, and said, "Ease up, tiger."

The life-threatening wrestle was over ... the warriors dusted themselves off ... smiles came out, backs were slapped ... words of friendship were exchanged ... and the game was complete.

I've not witnessed such a violent expression of mateship before ... and I'm still scratching my head over it - a senseless mistreatment of friends, or a primal expression of respect and honour? ... I'm not sure, but if it's the latter, it's strangely compelling ... dangerous ... but compelling.
Email Post
Labels: friendship love mateship state of origin