nobody's creative, everyone is ... 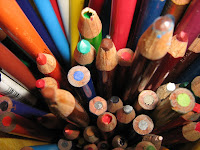 ming to realise that most of us are over-accustomed to creative elitism ... it's probably more tragic than we realise. The perceived superiority of those whom society considers "creatives" tends to smother ingenuity and originality ... I sometimes wonder whether our world is filled with people carrying all this repressed creativity ...

Why? I think it's fear. "Creatives" poo-poo everyone else's attempts to create because they fear competition .. and the rest of us fear creating because we feel we can't compete ... it needs to stop.

Maybe we think of "being creative" in an insufficient way .. kind of like it's a genre or personality type ... rather than a basic, yet beautiful, function of what it is to be a human being. Maybe being creative is a state of being human. We're designed in such a way that creating should be a natural expression of who we are ... musicians ... students ... parents ... accountants ... doctors ... art is in all of us in some form.

My hope is that more of us can overcome our fear and unblock the undiscovered flow of creativity that remains within ... realising that "nobody's creative, everyone is."

Helen said…
I think you're right Trav! I've always been too frightened to go and paint that huge!!!!! self portrait over the back walls of Coles....but now I feel my creative juices literally gushing, and I'm off.
Thanks for believing in me......(heh heh)
January 28, 2010 at 9:10 AM

Unknown said…
I say we are all creative because we were created in the image of the Master Creator. All of us want to create and that sets us apart from the other natural and lessor spiritual forces in this world. Creating is something deep in the core of our being...everyone wants to create something. How we manage/release the creativity is what labels one as a creative type.
January 28, 2010 at 7:02 PM