this is our mess 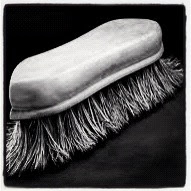 Devastating.  That's probably the only word that would describe the scenario.  The group  stood around the shards, rubble and vomit - and were simply devastated.

And so the polite questions of veiled accusation began to bounce around the circle.

"Did anybody see what actually happened?"

"How did it come to be here in the first place?"

"Is it possible the original design was faulty?"

And on it goes, around the circle - and the mess becomes their subject.  The stain solidifies, becomes normal and commonplace, and it's all the group now talks about.

One day a small child approaches the group, shoulders her way in-between two of the adults, falls to her knees and begins scrubbing.

"What are you doing?" enquires an elderly gentlemen, whose feet have become encrusted into the dried and putrid remains of this fracture.

"I'm cleaning up our mess."  she said without a second thought.

"So, you're to blame - this is YOUR mess?" chides a young woman, internally sighing a sense of relief.

"No," the young girl answered, "this is OUR mess."

And she kept scrubbing.