The People of God in Fountain Valley 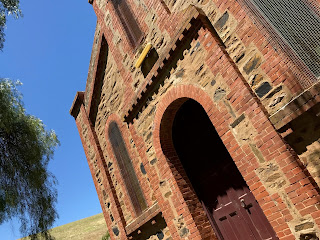 It wasn't difficult connecting with The Creator as I walked to church on Sunday morning.

The warm summer sunlight danced across my face - filtered by the large pines which surrounded a cemetery at the back of our estate.

A dense carpet of pine needles took me past the historic graveyard and led me to a quaint red-brick & sandstone chapel.

The chapel was empty, but laughter and warm conversation drew me to a fibro hall across the near-full car park.  As I stepped across the threshold, I was welcomed with a smile, handed a newsletter, and ushered to a seat.

I took a moment to survey a room not much bigger than a double garage, and I was compelled to imagine the stories of the grey heads that filled my immediate horizon.

A hymn.
A mission report.
A hymn.
An time of open prayer.
A hymn.

The 86 year old lay pastor - with a prostrate the size of a pomegranate (his words) - then opened up his Bible to Ezekiel 22.

In the midst of a broken city wall, God laments the judgement His people had fallen into through their rejection of Him - He could not find one man to 'stand in the gap'.

As the  elderly pastor lambasted the media, longed for parliamentarians to return to God's Word, and bemoaned the evil we are surrounded by, he challenged his flock to be people who would "stand in the gap."

As he pleaded for his people to be a voice of truth in our sin-soaked society, a thought came to me:

I appreciate that I sit in the midst of a generation who have always carried the assumption that they live in a nation fashioned on Christian principles, but even if their assumption was once true - it seems it can no longer be assumed.

So, if there ever was a time to "stand in the gap" and call this nation back to God, perhaps that time has passed.

If we are going to use the ancient people of Israel as a metaphor to engage with our culture, then perhaps we need to take up their story in Babylon, rather than in Jerusalem.

The ransacking has happened, God's people have been exiled, and we now find ourselves as "guests" in a foreign land.

The reality of sin and judgement and corruption and depravity is still the same, but the perspective as exiles revolutionises the approach of God's people.

Our posture is transformed from "standing in the gap" (Ezekiel 22:30) to one of "planting gardens" (Jeremiah 29:5)

- to live where God has placed His people with a generational expectation.

Where we're still longing for the day of ultimate deliverance, but we exhibit a passionate commitment to be the blessing of God in the land He has planted us.

After some courteous conversation, I stepped outside, across the carpark, and as I meandered back past the graveyard, I wondered:

"Where are the people of God in Fountain Valley? And what are they planting?"