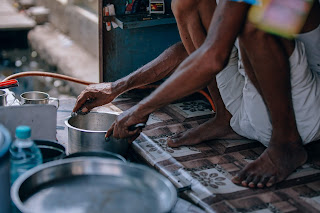 The temperature for revolution was heating up.

The crowds pressed in - tired of military oppression, and discontented by the political manoeuvring of their popular leaders and scholars.

The momentum of His fresh voice and the increase of His following had moved from an inconvenient noise, to a genuine threat to power.

Jesus was calling His riff-raff band of followers into the midst of the pungent and fertile hothouse of revolution.  And those who had worked so hard for the power they possessed were readying themselves for a fight.

Then he says this: "Be dressed and ready for service ..."

But the nature of this revolution was incompatible with anything they had come to expect.  It was to be led by a master who: "will dress himself to serve, will have them (his servants) recline at the table and will come and wait on them."

What kind of revolutionary prioritises service to the other?  Where the expectation is that power which oppresses or manoeuvres will be undone by the precedence of kneeling, washing, forgiving and loving.

This truly is "the 'other' revolution".