The Bible as a Screenplay - 3

THE SCREENPLAY - WHAT IS THE STORY? 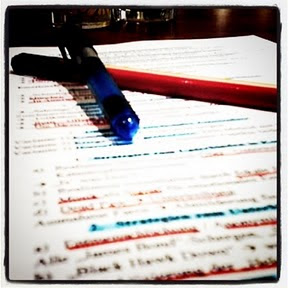 My perception of a screenplay is that it isn't worth much, unless it's really good ... And even then the final film may not look like anything like the original script once the director, actors and editor have all gotten to it.

I'm no movie producer, but I imagine the average producer's desk will have a high level of screenplay traffic. Everyone thinks they're an awesome writer, and that their idea is what will change the world, or make lots of cash at the box office. And so the producer faces the unenviable task of finding the one masterpiece amidst the drivel, or at least one that a great director can work from.

That's my stereotypical perception of a screenplay - it's usually not worth much.

This changes, of course, if the producer is an outstanding writer/director. Then the screenplay takes on a whole different priority. In this scenario, the one who writes the story brings the creative genius to visualize and direct it, and the capacity to see the project to completion.

So, when I think of the Bible as a screenplay, I don't so much see it as one of the many offerings that floats across a producer's desk hoping to be noticed - only to fall into the hands of a director who shows no concern for the original intent of the author, and a producer who is more than willing to sacrifice artistry on the altar of marketability and consumerism. No, this is THE screenplay that all of the industry longs to be a part of.

Written by the writer of all writers, who knows how this story should look, how it can be told ... and He has the capacity to see the project through to it's ultimate completion.