The Bible as a Screenplay - 4

THE SHOOT - HOW CAN THE STORY LOOK? 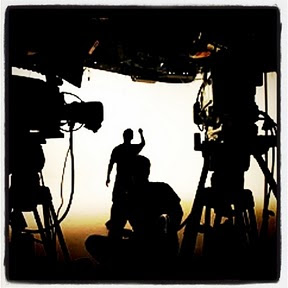 The actual shoot is a complex and pressured environment, but if done well can be an excellent example of a team working together to see a dream of come to fruition.

A good shoot assumes that a whole host of things have come together - mostly initiated by the director.

(There's a lot more to directing a film than what I first thought. My impression of the director just being the one who sat down on set and told everyone else what to do has pretty much been blown out of the water.)

Without the vision of the director, there is no film. The quality of how this story is told is dependent on the director's dream for the project, and there is a specific progression of events that take place for that dream to be realized. Here is some of that progression:

1. PRE-PRODUCTION ... Script selection - it is the director's responsibility to firstly identify a script that is going to work - there is much to be lost if the script that is chosen is a dog... Script wash - once a good script has been chosen, the director then needs to read, read, read it until it becomes a part of who they are, they understand the characters and what motivates them, how the flow of the story will work, and how it can be broken down into a story board, then shot lists in conjunction with the cinematographer. Alongside of this comes things like story boarding and shot listing, casting, location selection, wardrobe, music, etc. ... and all of this is pre-production

2. PRODUCTION ... Here the director needs to ensure that the story is told well, the right shots are taken to tell it, and to coach the actors according to how the story needs to be told as he's envisioned it. The shoot is where all the elements of pre-production should align, and all the elements for the next part of this process are gathered... That being:

In the meantime, consider the story of all creation, and how the One who has written the screenplay is not only the main character in this story, but is the director as well - He's done all the pre-production, ensuring that all the elements align for "the shoot"- the production. God's story comes to life as the players deliver their parts on set, trusting themselves to the Director's vision for how this story will look.

Sure, it might be argued that the characters in the Bible, and indeed the characters in this story today (us!), aren't just actors in front of a camera, but real people living real lives ... But nevertheless, the picture of God as our producer/writer/director is a helpful one.

So, where do we fit in this analogy? Could it be that we are the editors?