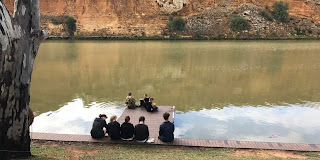 "Good morning, LOSER!!"  12 year old Ryan greeted me with a resounding battle-cry on the last morning of camp - still relishing in his victory over me in chess the night before.

I knew in my heart that I had been accepted.

Last week I had the immense privilege of spending four days by the river with around 30 young people and their leaders. My brief was to facilitate an opportunity for campers to learn through God's story, but I got so much more than what I bargained for.

Being immersed in a community who are reaching some of the most disadvantaged kids in our city was one of the most enriching ministry experiences I've had so far - here are four lessons these guys helped me with:

I noticed that any influence the leaders had among the campers was deeply rooted in relationship.  The young people in this community seem to carry an inbuilt resistance to anything that smells like authority - demonstrated by ignoring, talking over, or walking away.

When I heard some of their stories of how authority has been misused in their lives, it is little wonder that they discount any influence a 45 year old, male, teacher-type person might seek to exercise over them.

I found myself constantly monitoring my use of authority in the sessions I had with them, while still trying to facilitate an environment for learning.  Shh-ing never worked, sometimes a hand in the air had some effect,  a few times I found myself entering into the conversations groups were having while I was trying to present - sometimes I managed to steer their attention back to what I was presenting, other times I just couldn't.

What I did notice was that the leaders who had invested time and relational energy into the young people were the ones who were more likely to gain their attention - some of the time.


2. EXPECTATIONS MUST BE FLUID

I've never been one to hinge everything on "the last night of camp" for people to respond with faith decisions to God and His story, but I have found that the story of God often naturally brings people to a point of response.  So, we planned a run for a response session on the final night of camp, but it just didn't go as planned.

There were a few contributing factors, not the least of which was when the time came for me to invite the community to consider trusting God for the first time, there were a group of girls nattering away about something completely unrelated, and if I put pressure on them to be quiet it would have completely blown any relational traction I'd gained with pretty-much everyone in the room - so I wrapped it up.

The whole week was a journey of me (and the other leaders) constantly adjusting expectations.  What was really cool, was that often we were surprised by responses we weren't expecting - leaders told stories of how kids accepted me as a story-teller, or how they engaged with some of our learning activities, or even how the campers were happy for the leaders to pray for them.

Something that I really appreciated was the conversations I had with the kids - talking about their interests, their dreams - but it was usually in short bursts.  More than once, campers would bowl up to me and start chatting, then, after a few sentences (and sometimes in mid-sentence), they would walk away.

It was during these momentary bursts of interaction, that I realised that often their focus would be fleeting - so rather than get frustrated with their 'lack' of focus, I began to intentionally capitalise on the focus they did give me, and I found I was gifted with some unique opportunities to speak into their lives.

This insight also shaped how I retold the Bible stories we shared with them.

When setting the scene for our Bible narratives, we usually give people a 'narrative hook' - short stories about life that introduce some of the feelings experienced in the Bible narrative.

The leaders at camp were exceptional at noticing and celebrating the contribution of the kids to the community.

One example of this was when some of the kids walked out on my session.  Instead of just leaving the room, they asked their leader, John, if it was ok for them to go.  As he allowed them to walk out, John had the presence of mind to validate them in the fact that they thought to ask - rather than lamenting the fact that they weren't in the room, John noticed this shift in their behaviour, and celebrated that as a contribution to the culture of the community.

All week, I was so encouraged by leaders noticing the small things of kids doing duties, looking out for one another, or lasting longer before relational conflict - and they celebrated the small wins.

This not only became a rich source of affirmation for the kids, but it provided the leadership team with some tangible examples of transformation - for many contexts these examples might be considered small and inconsequential, but here there is genuine cause for celebration.


There's probably a bunch of other things I still have to learn from this amazing community, but this is what I have for now: RELATIONSHIP IS EVERYTHING; EXPECTATIONS MUST BE FLUID; VALUE THEIR FOCUS; and CELEBRATE THE 'SMALL WINS'.


I will never forget the love I felt from my new friends from Daveron Park - and I've come away with a deep assurance that God is at work in this community.  Who knows how these kids might change the world?!