BAPTISMS IN A WESTERN AUSTRALIAN DAM 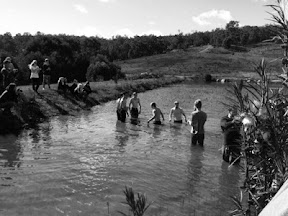 The answer to the question, "what do you want?" kept bugging me as I led a team from Adelaide to WA for YMA's annual IMMERSEWEST event in July.

Another question had formed, "Am I asking too much?"

Surely the stated goal of being a part of equipping a generation for a broader gospel paradigm was overstating the perceived need, if not, then perhaps it was just plain arrogant.

Then Ethan showed up with the words: "we should do that baptism thing."

Ethan was a young man with very little grasp on the Bible or the person of Jesus before his IMMERSE experience. On the second last day as he walked with some friends by the creek, after having made a first-time faith decision the night before , Ethan suggested that he and his mates should do what he'd heard in the story that morning - demonstrate his faith through baptism.

No-one told him that's what Christians do - he initiated the idea through what he'd heard and experienced.

The next day, after some conversation with the local youth pastor and phone calls with parents, five young men were baptised in the freezing cold waters of a dam in Logue Brook, Western Australia.

After seeing this kind of transformation, I had an answer to my question, "am I asking too much?” What was the answer?

"No - Bible engagement and discipleship through the lense of story is bringing significant transformation ... The sort that needs to be released into a broader scope."

But this answer raised another question.